The Impact of Emerging Technologies on Business

Design and Innovation | Ideas
Virtual reality and augmented reality are two of the most innovative technologies to gain mainstream traction over the past several years. These nascent media have taken content cues from the related fields of cinema and video gaming: that is to say that a significant amount of the content has been devoted to the purpose of consumer entertainment. However, businesses have identified other compelling use cases for these media that are all largely focused around the concept of utility.

Put simply, digital interfaces have the capacity to function as useful tools, and some of these tools make work easier, faster, safer, and more efficient. (For a more significant breakdown of the concept of utility apps, check out this post from Shockoe COO Alex Otañez). In the case of VR and AR, companies have been embracing these unique tools as a means of improving operations for a variety of use cases, all stemming from unique affordances inherent to the media themselves. I would encourage anyone who has read this far to download the full report posted below — while this post is a great start, the downloadable PDF provides a much deeper dive into technologies and use cases of how emerging technologies are impacting businesses and operations in 2018.

In a 2018 survey from immersive technology research group VR Intelligence, companies reported significant growth of VR and AR technology in both consumer and enterprise applications. In fact, 38% of respondents reported strong or very strong growth in VR for enterprise, and 43% reported strong or very strong growth in AR for enterprise. Additionally, enterprises have reported a significant intention to invest in immersive technology, with 61% citing VR and 58% citing AR as high priority business areas.

On the surface, it may seem that many companies are attempting to stay relevant in an increasingly competitive landscape. However, the powerful benefits of these new interaction methods can, in many cases, result in a significant benefit to the business in a variety of departments and across many different industry verticals. While respondents in education, AEC (Architecture / Engineering / Construction), and Manufacturing indicated the greatest adoption of XR tech, it is becoming clear that significant use cases exist for everything from health care, to banking & finance, to retail. The most commonly integrated use cases include:

The common thread throughout all of these use cases? Utility.

Implementation of immersive media must begin with developing a clear understanding of the affordances and constraints of the medium itself. For both VR and AR, you are interacting with objects and environments that are three dimensional. For VR, the user is placed into that environment and interacts from within. For AR, the user maintains a sense of their true environment and places and manipulates objects within it. Both media afford the user a true sense of the following:

In addition, VR affords the addition of:

Understanding these unique affordances of the media can help guide businesses when attempting to identify use cases in the areas outlined in the above section. For example, a true sense of size and scale can help manufacturers use AR to improve their quality assurance process or use VR to iteratively design product in a tactile manner.

It would benefit companies to look to smart speakers as a good example of how a medium’s inherent qualities can enable utility. For example, Google Assistant is a virtual personal assistant (or VPA) that is implicitly designed to offer useful benefits to the user. What makes it groundbreaking is the fact that voice interaction is so natively ingrained in day-to-day user interactions. Native language communication is one of the earliest developmental milestones for us as humans. As such, it is an interaction method that is largely heuristic, allowing users to interact in a natural manner to engender the desired outcome. In other words, the affordances of the medium itself make it more useful.

Virtual reality and fully spatialized augmented reality possess a similar quality. Even before we develop language, we develop fine motor skills in order to interact with the world around us. Picking up and manipulating objects is one of the greatest evolutionary benefits we have as a species. It has allowed for the development of tools, which has in turn allowed for the development of complex societies. Despite this, many traditional digital two-dimensional interfaces are limited in their tactility, forcing the user to operate in a rectilinear environment consisting only of an X and a Y axis. That’s not to diminish the value of two-dimensional interfaces—GUIs and touch-enabled mobile devices have been among two of the most groundbreaking societal advances. Yet, there are still certain tasks that might be better accomplished through three-dimensional interaction. By understanding the nature of immersive media, businesses can build useful applications that were previously impossible, thus improving accuracy, efficiency, connectivity, and mobility.

To learn more about how emerging technology is improving the way that businesses operate, download the 2018 Shockoe Emerging Outlook Report. 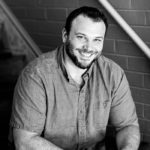 With over a decade of customer and user experience strategy under his belt, Dan Cotting is Shockoe’s Director of Immersive Technology and resident “future-tech-crazy-person.” Dan fully believes that virtual and augmented reality will pave the way for an entirely new approach to business operations: improving the lives of both employees and consumers, while simultaneously increasing business efficiency and productivity. When he isn’t dreaming about this “Ready Player One” future, Dan spends his free time playing bass guitar, practicing 18th century photographic techniques, brewing beer, and enjoying time with his wife Kelly and son Marshall, and their five rescue pets. He holds a B.S. from Boston University and an M.S. from Virginia Commonwealth University.