Like any generational label, the boundaries of what birth years are considered Generation Z are hazy, loose, and basically up anyone’s own interpretation. Gen Z is characterized as having grown up in the age of internet and social media. They don’t know a world without cell phones, and likely have never owned anything but a smartphone.

I, for one, happen to be one of the in-betweeners, a “zillenial’ if you will, part of the Genbetween. Born right in the mid-nineties, I’m too young to be a true millennial, but too old to be considered a true Gen Z kid. The result is an understanding of both, but not quite identifying with either.

It’s often said, “if you don’t remember 9/11, you’re Gen Z.” Do I remember that day? Sure, but I was in kindergarten, so does it really count?

Gen Zs grew up in a post-recession world. A world where living amongst a War on Terror was the norm, not the exception. Yet despite living amongst such dark events in the history of humanity, the members of Generation Z have used these tragedies and horrors as inspiration to change the world.

Because of these things they fundamentally interact & want to be interacted with in specific ways.

1. The digital world is the “real world”

Like Gen Z, Millennials grew up in an era of massive disruption. They experienced the birth of the computer age, and endured the recession. But unlike Gen Z, they remember a time before all of it. The Millennial generation is gripped by a powerful sense of nostalgia, a longing for the way things used to be. They miss the simplicity of biking around the block with friends, they’d go back to a flip phone if society didn’t necessitate a utility of a smartphone, and they’ll vehemently defend the RAZR and Nokia to their dying breath. Sweeping generalizations aside, you get the idea.

For Millennials, technology is regarded as not just a tool for productivity and convenience, but also as an escape, a sanctuary from the problems of the “real world”. Technology served as an outlet, a place for everything that didn’t have one in the real world.

Gen Z, however, sees technology not as an escape from the world, but an extension of it. The line between “digital life” and “real life” is far more ambiguous. In fact, they’d be more likely to say there isn’t a difference at all. For this generation, these two experiences don’t existent independently, they coexist and intersect in every possible way.

Even now, we see emerging technologies like AR, VR, and Voice beginning to transform the way we interact with digital space, and the way we integrate it with our everyday lives. Only time will tell what hidden possibilities lie in these technologies, and it’s more than likely Generation Z will be the one to show us just how transformative they can be.

2. Their idealism and propensity to lead will drive innovation

Gen Zs know just how terrible the world can be at times, but they also know just how great it can be. They’ve lived through a time of intense disruption, so they know not only the power of change, but also just how possible it is.

There is a passion for problem solving among Generation Z, and this, combined with their idealism, drives them to influence the world and make it a better place. Where Millenials looked at the world they were given and wanted to create a better one, Gen Z sees the world they were born into, the good and the bad, and strives to cultivate it.

As the most connected generation, Gen Z is hyper aware of what’s going on in society. They don’t just have access to copious amounts of information, they cannot escape it. Like any human being, Gen Zs can and will be biased by their own environments and upbringings, but they have the opportunity now more than ever to look into the lives of others, find information about things happening around the world, and be exposed to viewpoints and opinions that differ from their own.

3. Media is not just for consuming, it’s for creating

Gen Zs don’t just want an “experience”, they want products that allow them to create their own experiences. The kids and teens of today have grown up bombarded by content streams—it’s everywhere they turn. All this media is processed and filtered according to what they already know of the world, and it has inspired them to become creators themselves.

Not only can they discover content nearly instantly, but they can publish and share what they’ve created just as quickly. Whether it be memes, the perfect insta post, or a compelling youtube video, the vast majority of Gen Z creates and produces content on a consistent, daily basis.

Technology is a playground full of opportunities to experiment and test styles, ideas, or processes. Effects are instantaneous, and Gen Zs are accustomed to change, so rapid iteration is a natural fit for them, not something they must consciously adhere to.

As this generation begins moving into the workforce, their capacity to create and curate relevant content will propel technology into a period of unbridled growth. Their appreciation for the arts will inspire a renaissance of personal and cultural expression.

Gen Z seeks authenticity, honesty, and depth. They have the ability to curate content, but also their lives. The abundance options they’re presented with on a daily basis allows them to be as selective as they like with what they allow into their life, spend their money on, or dedicate their time and energy to.

Since their virtual lives and “real” lives are one and the same, Gen Zs see online messaging equally as valid as phone calls, or in person communication. The deciding factor for which they use and prefer, is which will provide genuine connection.

Surrounded by so many screens from such a young age, Generation Z understands how vital human connection is, and in fact prefers in person communication over any other form.

Sure, pop culture is fun, and flashy aesthetics are engaging for a time, but authenticity is what drives them. This exposure to so much information and media gives Gen Z a keen ability to spot what is fake. They are creators themselves, and they understand just how easy it is to create fake.

Gen Zs have grown up on vlogs and listening to youtubers describe their lives. They’ve also witnessed the shift when these influential voices become sponsored and change their message or delivery. They know the difference between scripted and transparent, so while things like reality tv may be entertaining, they don’t capture Gen Z’s drive or attention the way their goals do.

When it comes to where they spend their money, Generation Z is savvy, and concerned about not just a product or service, but also the company providing it. With so many options, they can afford to have high standard. They believe the products they buy should support their needs and interests, and their spending habits will reflect this.

Gen Zs buy the things they like, not the things they’re told they should like. The brand loyalty of a Gen Z is fierce and invaluable, but it isn’t invincible. A Gen Z consumer won’t hesitate to unreservedly abandon a branded ship the moment it crosses the line—whatever that “line” may be in their mind. Loyalty requires not just quality content, but also integrity, transparency, and honesty from companies.

Don’t expect this up and coming generation to be followers, expect them to create their own trends. Their intense idealism gives them the passion to pursue change, to expect the most from themselves and others, and unleash the full potential of their creativity. Yet amidst this idealism, their realism gives them the grit and determination to truly turn their ideas into actuality.

Gen Zs are our pillars of innovation. They embrace change as the only constant they can rely on. They’re the ones who won’t let the world tell them who they are, because they’re too busy figuring that out for themselves. They aren’t afraid to speak up, and they aren’t afraid to fail. Gen Z refuses to accept the world for what others tell them it is, because they believe in what it can be, and they know they can make a difference.

Technology is their form of empowerment. It is their tool for bringing profound change to this world.

With these committed, passionate, and more than competent individuals setting up to take their place as the drivers of society, the world of technology better fasten it’s seatbelt, because a whole lot of change is coming its way. 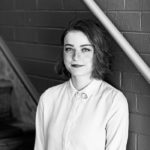 Hannah is a UX/UI Designer with a passion for all things creative and a penchant for the whimsical. If she’s not at her desk designing the next rad app, she’s probably off painting, or drawing, or drafting her third novel! Fueled by an overactive imagination and copious amounts of tea, her goal is simple: elevating the human experience through tech.