During the course of publishing a pro-bono mobile experience for the non-profit Roatan Marine Park out of the Bay Islands, Honduras, something struck a chord with the Bill Nye bobblehead that sits on my left shoulder. Where’s the category for Changing the World? it whispered.

There isn’t one. For the Roatan app, RMP iPatrol, which allows citizens to report illegal activity harmful to the surrounding Mesoamerican reef – the world’s second largest – our best options were Education or Travel.

In the process of writing this post, I went to the Play store to see what showed up. Following the games and ‘entertain yourself’ recommendations, this is an example of the apps displayed: 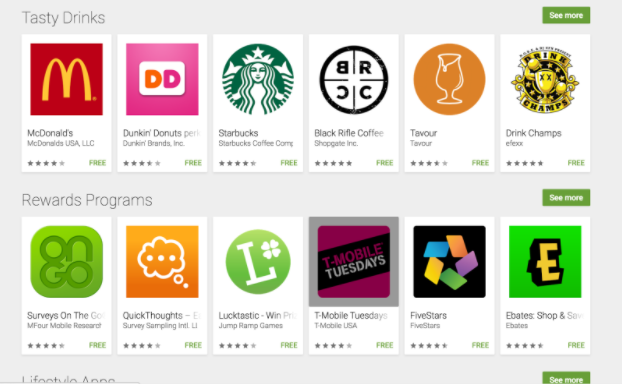 Granted, this was on my work account. As a designer at Shockoe, I work on a lot of enterprise apps that often aren’t accessible via the app store, but I also download, assess, test, and work on all types of consumer mobile applications, including those for rewards programs, tasty drinks (still can’t get over that callout), financial and social. It makes sense that I’d have a very commercial constellation of recommended apps.

There are roughly 2.5 – 3 million apps available on the respective app stores and, based on sheer volume, gaming still smashes all other categories. It’s not a leap to say that in terms of engagement the winners are those that could be referred to as “bored now” – games and social apps that are designed to fill your time and attention when you’re in the waiting room, lunch break, or refusing to fall asleep.

The popularity of gaming, social, and entertainment apps isn’t likely to change, but what can is our commitment to bringing effective mobile solutions to the Davids out there battling on our behalf.

I have kept an approving eye on things like Civic Hacking, Citizen Science, and Tech for Good, but my appreciation for how powerful mobile could be in the non-profit, changing the world space – particularly for reporting, data collection, and community building – has me convinced that David’s slingshot is primed for an update.

Based on conversations with a non-profit client and my own experiences, here are a few considerations for those looking to do their part in making mobile apps for good.

1. Make sure you are willing (and able) to commit to the problem, not just an app

Firms should pursue issues that they care about and that the company will wholeheartedly get behind. Coming into a non-profit project with a one-and-done type mindset – swoop in, build a quick app, slaps on the backs, then it’s back to work as usual – at best will provide temporary fixes. At worst it will alienate users with sub-par experiences due to being outdated and unsupported. We need to be taking these projects on like we normally approach apps – as products that require constant improvements, maintenance, and validation that we are indeed solving the problem we set out to solve.

Regardless of what issue your app seeks to solve, other non-profits are probably working in the same space and on similar problems. Consider the benefits of building an adjustable/scalable framework that could be tailored for specific needs. Time spent on APIs and scalable architecture is almost always time well spent. If you want to track the health of monarch butterfly populations/migrations it wouldn’t make much sense to gather data in one county. You build a monarch tracking app, make it publicly available, and have a central database with easily surfaced data that researchers everywhere can access.

3. Consider the lessons from models in the community and contributor-driven apps

There is a subtle power in the give-and-take nature of community-driven apps. Waze has a huge and fanatic volunteer contributor community. The app works almost entirely on the goodwill of the driving community (and some algorithms, GPS, and other cool stuff). Benefitting from the contributions of others creates a compelling feeling to return the favor and an emotional reward for doing so. You see the same type of situation in plant identification apps, car repair forums, and countless others. It pays to study up on the mechanics of people helping people to do a collective task.

Especially if you’re working with a smaller non-profit, it’s likely that there is no CTO, CIO, IT department, or perhaps anyone who has done a technical project. This is an opportunity to be a great coach (and evaluate your own process). Be clear about how the project will work and what you need from them. Explain acronyms and jargon. Your goal, as hopefully, it is with every project, is to share knowledge and impart confidence.

5. Resist the temptation to experiment or deviate from your standard process

Steer clear of using your non-profit project to experiment with your process or throw a junior team into a sink-or-swim, figure-it-out situation. I have heard it from more than one person working in the non-profit space that they rarely receive the same quality or level of professionalism from companies that are donating services. The standards you hold to yourself shouldn’t be variable. Don’t make an exception.

6. Respect each other’s timelines and responsibilities.

In my experience, employees at non-profits often do have more responsibilities than their counterparts at standard businesses. Lack of resources forces everyone to wear more hats. Be cognizant going into a project that the folks leading the charge often have so much on their shoulders that even if they love the project it can turn into one more burden on a pile of others that leads to stress.

If that’s the case, our approach as consultants should be either to 1) assume as much ownership over the project as can be done without jeopardizing the expertise/institutional knowledge the NGO brings and/or 2) be hyper-aware of (and plan for) client-side deadlines/responsibilities.

I am convinced that mobile can play an important role in bringing about the types of changes that would benefit us all. Consider the following (in a non-judgemental, shame-free way): in 2017 we are projected to hit nearly 5 billion mobile users worldwide. [source]. As of last year, we were collectively spending over a billion hours a month on mobile games alone, second only to social media usage. [source]. Imagine the impact we could make if we all had at least one app on our phones that allowed us to contribute to solving a community issue, or if we spent just 1% of our gaming hours on cataloging invasives or mentoring young folks, or, as residents of Roatan now can, reporting damage to coral reef systems.

Better yet, find what you care about and let’s make it happen.

[Note: I acknowledge that things are rarely as simple or black and white as some of the references or points above. Mobile isn’t a silver bullet, but it also does a lot on its own already – apps bring healthcare to rural populations and information to the underserved, Waze cuts drive times which in turn cut down CO2 emissions, business apps cut paper waste and improve efficiencies. But still. We can do more.]

Editor: Learn more about the Roatan Marine Park project and how Shockoe is contributing to saving the world’s second largest reef.

Read what our partner, Axway, is saying about RMP iPatrol.

If you’re interested in getting started on your own idea, reach out here for more information.

Sign up for the Shockoe newsletter and we'll keep you updated with the latest blogs, podcasts, and events focused on emerging mobile trends.